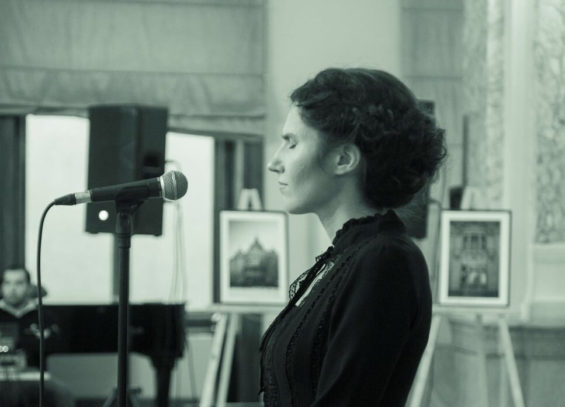 A singer, musician, music producer, folk tale narrator and researcher of Georgian traditional songs. The “Bruno S.” music video is her directorial debut. She was born and raised in Krakow, but for the last 12 years she has divided her life between Poland and Georgia, the Caucasus. With an MA in Conflict Studies from the London School of Economics, she worked in the conflict zones following the 2008 war in Georgia. Having chosen the arts as her way to contribute to peace building in the world, she initiates and curates international interdisciplinary artistic projects promoting intercultural and intergenerational dialogue, and the music of undiscovered composers. Currently, Kościuszko ArtsLink International Fellow, she returns to her family and musical roots in the “Bruno S.” music video.

From an early age, she is in love with jazz and Polish songs. The first jazz musician that Yoanna met in her was the late Jerzy Michał Bożyk, a friend of her parents. It was in a duet with Jerzy Bożyk that she made her debut in front of the public, at the age of four. This debut took place in the final years of communism in Poland, at a Christmas radio broadcast in Krakow’s largest prison. Yoanna performed two songs to the accompaniment of Jerzy Bożyk. These met with the full applause of the prisoners in the cells.

After 30 years of friendship between Jerzy and Yoanna’s parents, the duo comes back with the song and the music video “Bruno S.”, which Jerzy taught Yoanna many years before.

More information about Yoanna’s recent music projects can be found in the photo gallery.

Yoanna is also active in the social spheres. In Tbilisi, she organises music and cultural activities with the aim of strengthening ties between Georgia and Poland. In 2018, she initiated and run a series of events promoting the works of Konstanty Gorski in Georgia. The project was implemented by the Creative and Active TAK! Association from Cracow, where Yoanna is a Board Member, in cooperation with Tbilisi-based Polish diaspora organisations; and funded by the Chancellery of the Senate of the Republic of Poland. As part of the project, Yoanna organised a gala concert on the occasion of the 100th Anniversary of Poland Regaining Independence, which turned out to be the largest event of the Polish diaspora in Caucasus.

In the times of the pandemic, Yoanna launched a collaboration with the Krakow-based visual artists, in order to complete the “Bruno S.” music video, that had not been finished because of Jerzy’s death. Together with the Creative and Active TAK! Association, she called this initiative “Jerzy Bożyk Tribute Project”. The premiere of the “Bruno S.” music video took place on 27 December 2020. “The song and the video will hopefully bring warmth and encouragement to all in these challenging recent times, as it expresses support to the elderly and people with disabilities, whose lives have been especially affected. Jerzy Bożyk spent many years in a wheelchair yet despite all these challenges, he gave joy and encouragement to many people with disabilities as well as to the young and old”, Yoanna says.

Yoanna received a scholarship and is currently studying at Berklee Online, which is the online extension of Berklee College of Music.

Apart from this, she constantly develops her skills during music and theatre masterclasses (Royal Academy of Music in London, National Theatre in London, Theatre Royal Haymarket in London, Centre for Theatre Practices “Gardzienice”, New Music Incubator in Warsaw and Brussels, National Cultural Center’s training for theatre animators in Radziejowice).
In her vocal self-development, she constantly explores the interrelations between the body, voice and imagination.

Yoanna has enjoyed living in Georgia because of her passion for the Georgian music. And above all, for her beloved professor of singing – a famous vocal coach throughout Caucasus, Prof. Guliko Kariauli.
When starting her studies at the Tbilisi Conservatory, she was already working in her first profession – as a political scientist specialising in conflicts in Caucasus. She worked in the press office of the EU Monitoring Mission in Georgia, which was created as a result of the war in 2008. Just when the war broke out, Yoanna was studying in London and completing her master’s thesis on the conflicts in Caucasus. By that time, she had visited Georgia repeatedly as part of research and development projects.

“When working in Georgia, I missed making music very much. That’s why I started looking for a singing teacher. And after many attempts I managed to get to the most respected, Prof. Guliko Kariauli.” She first had the idea that Yoanna should audition to study at the Sarajishvili State Conservatory in Tbilisi.

“Lessons with Guliko were a complete revelation for me, so I did not hesitate to take up his suggestion” – she recalls. Once at the Conservatory, she graduated from the Vocal-Acting Department and also completed a postgraduate course in Georgian and Abkhaz traditional music. “In Georgia, nearly everybody sings, people can sing folk songs from childhood and moreover, they can also sing many other songs in three types of voices. Therefore, no one at the Conservatory was surprised that first I had an opera singing class on the second floor and then I went to the fourth floor, where I learnt traditional songs, like lullabies, working songs or songs to the Sun.

Thanks to these lessons, I became a full-fledged participant at traditional Georgian feasts, at which singing is an important part”, she describes. Yoanna also carries out musical-ethnographic research in the remote mountainous regions of Georgia. “I am fond of learning songs from the local people, for whom music is an inseparable element of their lives; people who do not know notes and who have learnt these songs from their grandmothers and grandfathers. Their music is truly authentic.”